The story of This Anime happens to be my all time favorite. takes place on planet Aqua, a terraformed Mars in the 24th century. Mars is called Aqua because it is a planet filled with endless amounts of water. Akari, our protagonist travels to Aqua from man–home (Earth) with the dream of becoming an Female tour guides in Neo Venetsia are called Undines which roughly translates to “water fairy”. in the city of Neo Neo Venetsia takes inspiration from the Venice of Italy, hence the name New Venice. Akari’s journey begins at the humble Aria Company which consists of only one Undine named Alicia Florence.

Aria is told mainly in three parts, Aria The Animation, Aria The Natural, and Aria The Origination. The canonical order looks more like this. 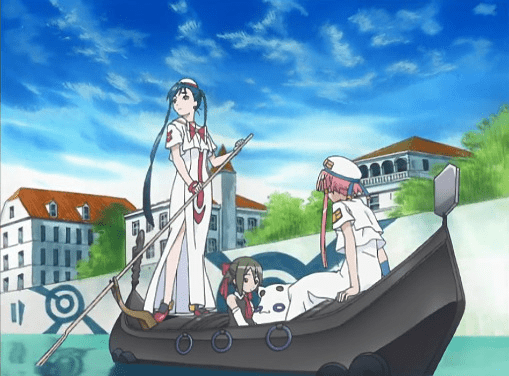 Aika, Ai, and Akari on a gondola element into the story and animation. This is very difficult to do, but in pulling this off the story becomes multi–dimensional, which epitomizes the slice of life genre. This is realized beautifully in Aria The Origination. The story just leaves you smiling. The dystopian science fiction aspects are neatly tucked away because the story is told in a such calm and natural way.

The classical guitar is featured prominently throughout the show, by a Yes, looked it up. called Choro Club. The string technique isn’t overly classical as it still improvises around core melodies, but it’s easy to identify due to the extremely See the Choro genre. playing style. The improvisations have enough targeted complexity to not to be completely memorable. That means it’s easy to listen to over and over again. Here’s a few of my favorites.